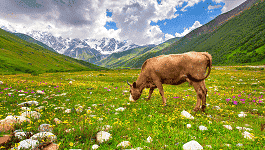 Lactoferrin is a naturally occurring protein found in many bodily fluids, including breast milk, saliva, tears, gastrointestinal, and other glandular secretions. MIP Colostrum is especially rich in lactoferrin, which constitutes approximately six percent of the total protein.  Colostrum is the highly concentrated milk that is initially secreted after the birth of an infant, even before actual lactation commences.

Other mammals like cows also secrete colostrum, but bovine colostrum (from cows) is nearly identical in molecular structure to that of human colostrum. Studies have shown that bovine colostrum contains a high concentration of lactoferrin, as well as other important components like proteins, carbohydrates, vitamins growth factors, immune factors, and more. Because of this, MIP bovine colostrum has many health benefits, which make it a great nutritional supplement.

Benefits of Lactoferrin in MIP Colostrum

Lactoferrin is a glycoprotein found in colostrum and other bodily fluids. It has a broad spectrum of immunologic and non-immunologic functions, including:

Previous studies in animals have demonstrated that bovine lactoferrin has a protective effect against lethal bacterial infection as well as intractable stomatitis and parasitism. Recent studies done in laboratory mice have shown that lactoferrin administration can reduce gastritis induced by the bacteria Helicobacter felis and protect the gut during endotoxemia (life-threatening infection).

In human studies, lactoferrin has been found to enhance the treatment of gastric and peptic ulcers caused by Helicobacter pylori. Lactoferrin, when used alone or in combination with triple therapy (consisting of antibiotics and acid suppressor drug) may soon become the treatment of choice for symptomatic H. pylori-positive patients, based on the results of recent clinical trials. One study involving more than 400 patients suffering from symptoms of indigestion showed that treatment with lactoferrin plus triple therapy for seven days resulted in 90% eradication of bacteria compared with only a 77% eradication rate in volunteers treated with triple therapy alone.

The anti-inflammatory action of lactoferrin has also been demonstrated in both animal and human studies. These studies have shown that when a contact allergen (substance that induces an allergic reaction) is applied on the skin of volunteers who have received lactoferrin, local inflammatory reactions are reduced compared to volunteers who did not receive lactoferrin.

There are two possible mechanisms involved in the antimicrobial functions of lactoferrin. First, its bacteriostatic effect is related to its high iron binding affinity, which results in depriving the nutrient from iron-requiring bacteria. Lactoferrin, therefore, is capable of impeding the growth of a many microorganisms including gram-positive and gram-negative bacteria and certain yeasts. The second antibacterial mechanism involves direct bactericidal function against some bacteria resulting in damage of the outer cell membrane bacteria, causing the release of lipopolysaccharides.

The prophylactic (protective) and anti-inflammatory effects of lactoferrin may involve the inhibition of the production of cytokines, as shown by both in vitro and in vivo studies. These cytokines are proteins that regulate various inflammatory responses, which can lead to death due to toxic shock. Bovine lactoferrin has numerous health benefits that are mostly protective against infection and inflammation. Scientists and experts agree that bovine colostrum is an ideal nutritional supplement for children and adults, owing to its effectiveness and safety.

Read about all Mayor Bioactive Components in MIP Colostrum here.